One of the sweetest days to celebrate is National Cupcake Day. Cupcakes are adorable and delicious, which makes them irresistible. Small cakes in a single serving size — what’s not to like?

When is National Cupcake Day Celebrated?

Cupcakes first came around in the 19th century. The first cupcakes were not frosted, but flavored with spices or dried fruit and cooked in cups. Early savory cupcakes were sometimes covered in lard or gravy.The Hostess Cupcake in 1919 was the first mass-produced cupcake. The popularity of the cupcake soared in the year 2000. The first cupcake only bakery, Sprinkles, opened in 2005 in Beverly Hills, California. 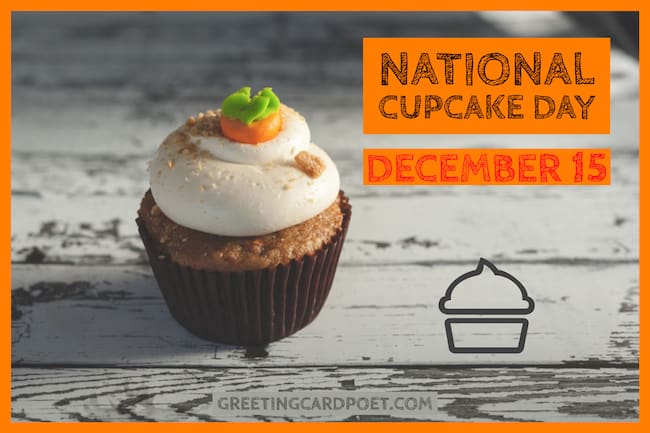 a.) There are over 400 cupcake bakeries in the United States.

b.) The record for eating the most cupcakes in the shortest time is 29 cupcakes in 30 seconds.

What’s the difference between a Cupcake and a Muffin?

Cupcakes often have frosting, whereas muffins do not. Muffins often overflow their baking cup to create a mushroom shape.

Cupcake Bakeries Worth Visiting in The US

When you hold a cupcake, sorrow disappears.
Unknown

Definition of a balanced diet: a cupcake in each hand.
Unknown

You can’t be sad while holding a cupcake.
Unknown

Cupcakes when you want to watch your weight, but still feel the pride that comes with eating an entire cake.
Dana Gould

Cupcakes are sweet and even sweeter when shared.
Marie Williams Johnstone

Cupcakes and muffins are like twin sisters, one of whom makes no effort to hide that she sleeps around.
Sadao Turner

Any cupcake consumed before 9 a.m. is officially a muffin.
Unknown

Making all my friends cupcakes for the holidays… the fatter they get, the skinnier I look.
Unknown

I thought clean eating meant mopping the floor while eating a cupcake.
Unknown

Money can’t buy you happiness, but it can buy you cupcakes.
Andy Atticus

Happiness is only a cupcake away.
Unknown

Be a cupcake in a world full of muffins.

If at first, you don’t Succeed, eat a Cupcake!

A balanced diet is to keep a cupcake in each hand.

A meal without Cupcake is like a day without sunshine.

When stressed and in doubt, cupcake it out.

When you frost a cupcake, you spread the love.

Life is full of questions, cupcakes are the answer.M

Making the world a better place, one cupcake at a time.

Keep Calm and Eat a Cupcake!

A bite of Heaven.

Paradise in a cup.

A little sweetness of Heaven.

Every bite’s a winner!

You are the Icing on My cupcake.

The recipe for happiness.

Don’t over mix, or under mix.

Use a cookie scoop so cupcakes are consistent in size.

Allow baked cupcakes to cool on a rack.

Don’t skimp on the frosting.

Mary Jo has been making cupcakes for some 30 years from her home in St. Paul, Minnesota.

The Icing on the Cake