You are here: Home / Greeting Card Poet Blog / Most Popular Terms of Endearment: A Brief History

We use many terms of endearment – words and phrases to say “I love you” to our loved ones. ‘Darling’, ‘honey’, ‘sweetheart’ and ‘dear’ are some of the most commonly used words, not only for lovers but also for kids. At times, an entirely unrelated word or phrase may be used.

2.) Baby — Where would love songs be without the word “Baby”?

4.) Honey — Another sweet way of describing your sweety.

6.) Bae — A shortening of babe  – meaning “before anyone else” – which is frequently used in musical lyrics.

8.) Love or My Love — A very British way of addressing your significant other.

9.) Darling — Can be used in a broader, flirtatious sense, but also to address your partner-in-crime.

14.) Princess or Prince — Give your partner the royal treatment.

15.) Angel — When someone is so good they must’ve been sent from above.

17.) Sunshine — Works well for that person with a smile on her face and a bubbly personality.

19.) Tootsie — Whimsical way of calling out the one you love.

20.) Sweet Pea — Like honey or beautiful, it’s a term of affection reflecting the beauty of the sweet pea flower.

25.) Pumpkin — Fun to say, but how many folks want to be compared to a gourd?

26.) Snookums — Can be used for a spouse, friend or child making it a versatile term of endearment.

27.) Honeybun — Three syllables is a lot to get out on a regular basis, so this one might see limited use.

28.) Romeo — Modeled after half of the famous Shakespearian pair.

29.) Snookie — Probably best reserved for the one you cuddle with.

30.) Dear — Again, a utility fielder that can be used to address many different people and relationships. Example: “Will you be a dear and hand me the vase?”

31.) Cutie-Pie — Did bakers come up with half of these expressions?

34.) Kitten — After bakery items, animals are another big category to choose from.

35.) Loverboy — If you don’t remember this lyric from the movie Dirty Dancing and the song, “Mickey and Sylvia,” well, you just weren’t paying attention.

36.) Poo — Short and kinda cute, but there’s the whole thing about the alternative meaning you’re going to have to get around.

37.) My Lamb — Another animal reference.

40.) My treasure — For the accountant in the family.

There are anthropological origins to pet names used in different types of relationships. Relationships are small cultures in themselves and rituals like nicknames and similar private languages reinforce them. Although they play a healthy role in ordinary times, terms of endearment are useful whenever conflicts arise. They allow a natural recourse to playfulness and humor whenever things become rough in relationships.

Couples in the UK use “Love” more frequently than most to describe their significant other. ‘Love’ and ‘darling’ can also find a place once in a while. It is amusing that British couples gradually lose their interest in using creative words and phrases with age. Interestingly, they are more likely to make up for this by using words of affection for their children.

You shouldn’t be surprised if parents call their kids ‘pumpkin’, ‘lamb’, ‘sweet pea’ or ‘pikaninny’ in British English. In Scotland, children are often called as ‘bairnie’ and in Ireland as ‘mhuirnin’. Teens usually use the words ‘lover’, ‘baby’, and ‘babes’ to express their affection.

‘Honey’ has been found to be used as a word of affection since at least the 1500s. ‘Sugar’ and ‘baby’ are more recent words. Let’s look at the brief history of some of the most commonly used terms of endearment.

Sweetheart – The first time the word ‘sweetheart’ was used to express love, it was written as two words – ‘sweet’ and ‘heart’ during the 17th century. It has been used traditionally for expression love and affection both generally and for a specific person with whom one is in love.

But starting the 19th century, ‘sweetheart’ has been seen to be used as part of disdainful slang language in many cases. One example is that of Frank Parrish’s book, Fire in the Barley, where he uses it in the following way – “Try harder, sweetheart, or I’ll plug you in the guts.” 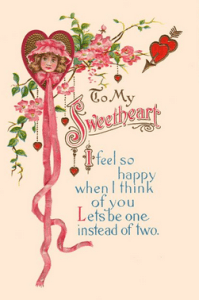 Darling – It is one of those rare few words of endearment that crosses different boundaries. It has been used traditionally by everyone ranging from the taxi cab driver – “where are you going darling?” to the upper classes. Interestingly, it is a rephrasing of the word ‘dear’, coming from the old English word of ‘deorling’, taking the shape of ‘deyrling’ over the 16th century and then becoming ‘darling’ eventually.

Sugar – ‘Sugar’ has been in use since the 13th century. It has been used in the proverbial and figurative sense since then. But the current way of using the word originated only during the 1930s. It has taken many other forms like sugar-pie and sugar-babe, and many others. A more recent song goes – “Tippy tap toe, my little sugar plum” (Woody Guthrie).

Baby & Babe – These are a couple of the most commonly used words of affection almost all over the world. The reason is probably simple – both babies and loved ones evoke almost similar kind of emotions. We want to love, care for and protect them. ‘Baby’ can be more commonly seen as a normal word used between lovers in the US.

‘Babe’ is nothing more than a shortened form of the word ‘baby’ and is mostly seen used in Britain. The word ‘baby’ can seem to be arrogant and not welcome unless it is used in a playful or comical form. These two words are different from the above-mentioned terms of endearment in that they are used only between couples. They are seen as offensive if used by strangers.

There are two splendid examples of how people have used terms of endearment in ways that are at the opposite ends of the intensity of love.

Vladimir Nabokov’s love letters for his lady love Vera are considered as one of the best examples of the use of creative words of affection. His initial love letters opened with terms of endearment like “my dear life”, “my love and joy”, and “my happiness”. Gradually, his use of words turned to interesting nicknames and a loving series of the bestiary. It is worth mentioning both the lovers shared a love of animals between them. So his later letters could be seen starting with my “Mousie”, “Sparrowling”, “Roosterkin”, and “Mymousch” (stands for a monkey in Russian). With words like ‘Fire-Beastie’ and ‘Pupuss’ (a mix between a puppy and kitten), he took things to the extreme.


The Romans can be seen to be standing at the other end of the spectrum compared to the level of intensity used in the words of affection by Nabokov. Some of the most commonly used words in love letters during Roman times include ‘dearest’, ‘sweetest’, and ‘well-deserving’. Some can seem to be touching on the borders of official words.

The words for ‘dearest’ were ‘carissimus’ and ‘carissima’. ‘Dulcis’ is ‘sweetest’ and ‘bene merens’ is ‘well deserving’ in Roman. In other words, the traditional words of endearment used in Roman love letters were more restrained in terms of their declaration of love.

Tim is a writer, creative director, and toy inventor living in the Twin Cities. Mike is editor of Greeting Card Poet.

So, when you’re writing to your loved one for Valentine’s Day this year, use a term of endearment that you know and love.

What to write on Valentine’s Day Card