You are here: Home / Karma Quotes

This collection features wise, funny, inspirational, and entertaining sayings from notables in different fields. You can share these sayings with people you love and care about so that they too can find the inspiration to do good deeds in their lives.

How people treat you is their karma; how you react is yours.
Wayne Dyer

I saw that!
Karma

Do good and good will come to you.
Unknown

Karma has no menu; you get what you deserve.
Unknown

If you give a good thing to the world, then over time your karma will be good, and you’ll receive good.
Russel Simmons

Is fate getting what you deserve, or deserving of what you get?
Jodi Picoult

Like gravity, karma is so basic we often don’t even notice it.
Sakyong Mipham

According to the karma of past actions, one’s destiny unfolds, even though everyone wants to be so lucky.
Sri Guru Granth Sahib

No need for revenge. Just sit back and wait. Those who hurt you will eventually screw up themselves and if you’re lucky, God will let you watch.
Unknown

Karma, ahhh. We sow what we reap. We reap what we sow! The law of cause and effect. And we are all under this law.
Nina Hagen

I would never disrespect any man, woman, chick or child out there. We’re all the same. What goes around comes around, and karma kicks us all in the butt in the end of the day.
Angie Stone

Your believing or not believing in karma has no effect on its existence, nor on its consequences to you. Just as a refusal to believe in the ocean would not prevent you from drowning!
Unknown 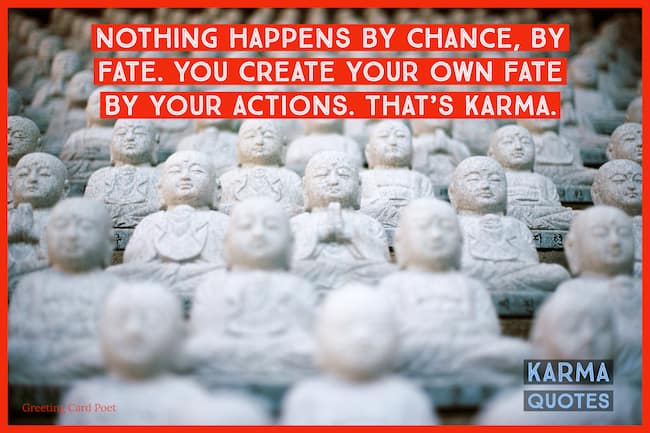 “The sum of a person’s actions in this and previous states of existence is viewed as deciding their fate in future existences.” (In Buddhism and Hinduism).

Check out How to start a blog page.

What Goes Around Comes Around Quotations

What goes around comes back around.
Unknown

You cannot do harm to someone because someone has done harm to you. You will pay just like they will.
Ericka Williams

Every action has an equal and opposite reaction. This is the law of the universe and spares none. Wrong done and injustice inflicted is paid back in the same coin. No one has escaped the justice of the universe. It is only a matter of time.
Anil Sinha 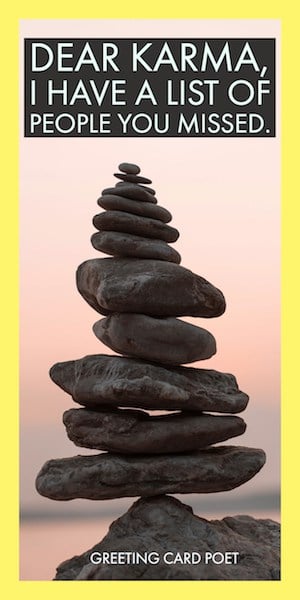 Karma, memory, and desire are just the software of the soul. It’s conditioning that the soul undergoes in order to create the experience. And it’s a cycle. In most people, the cycle is a conditioned response. They do the same things over and over again.
Deepak Chopra

I’m a believer in karma, and I’m also a believer that things happen for a reason.
Bill Goldberg 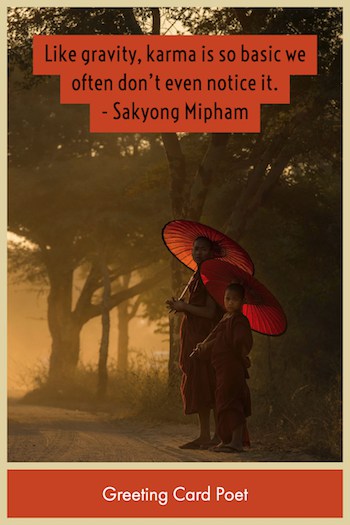 There’s a natural law of karma that vindictive people, who go out of their way to hurt others, will end up broke and alone.
Sylvester Stallone

Karma comes after everyone eventually. You can’t get away with screwing people over your whole life, I don’t care who you are. What goes around comes around. That’s how it works. Sooner or later the universe will serve you the revenge that you deserve.
Jessica Brody

Karma bides its time. You will always have to watch out. Karma is unforgiving and always gets payback.
Benjamin Bayani

A man is born alone and dies alone, and he experiences the good and bad consequences of his karma alone, and he goes alone to hell or the Supreme abode.
Chanakya

As long as karma exists, the world changes. There will always be karma to be taken care of.
Nina Hagen

Karma is experience, and experience creates memory, and memory creates imagination and desire, and desire creates karma again. If I buy a cup of coffee, that’s karma. I now have that memory that might give me the potential desire for having a cappuccino, and I walk into Starbucks, and there’s karma all over again.
Deepak Chopra

People pay for what they do, and still more, for what they have allowed themselves to become. And they pay for it simply: by the lives they lead.
Edith Wharton 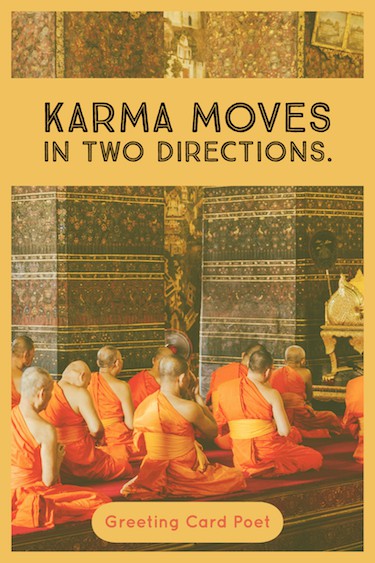 Once you’ve lived a little you will find that whatever you send out into the world comes back to you.
Slash

I’m a true believer in karma. You get what you give, whether it’s bad or good.
Sandra Bullock

If we act virtuously, the seed we plant will result in happiness. If we act non-virtuously, suffering results.
Sakyong Mipham

Even chance meetings are the result of karma… Things in life are fated by our previous lives.
Haruki Murakami

Nothing happens by chance, by fate. You create your own fate by your actions. That’s Karma.
Unknown

Most times, how you treat your children is how they grow up to treat you.
Terry Mark 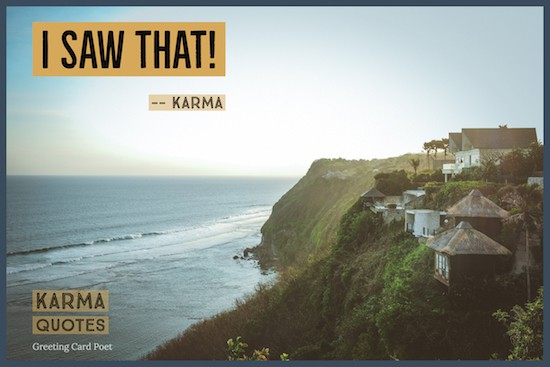 Figure out what you’re good at and start helping other people with it; give it away. Pay it forward. Karma sort of works because people are very consistent. On a long enough timescale, you will attract what you project.
Naval Ravikant

It is in the best interest of a man to become a Karma-Yogi and work to the best of his abilities and without bothering about the results.
Sam Veda

Contrary to popular misconception, karma has nothing to do with punishment and reward. It exists as part of our holographic universe’s binary or dualistic operating system only to teach us responsibility for our creations-and all things we experience are our creations.
Sol Luckman

Note: Any suggestions for additional karma quotes? Let us know via the contact page. 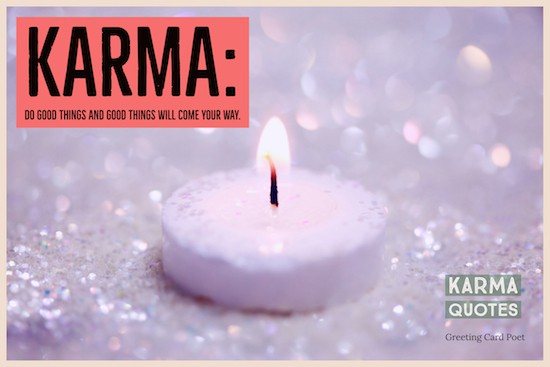 Still, others commit all sorts of evil deeds, claiming karma doesn’t exist. They erroneously maintain that since everything is empty, committing evil isn’t wrong. Such persons fall into a hell of endless darkness with no hope of release. Those who are wise hold no such conception.
Bodhidharma

Karma has a surprising way of taking care of situations. All you have to do is to sit back and watch.
Unknown

Things don’t just happen in this world of arising and passing away. We don’t live in some kind of crazy, accidental universe. Things happen according to certain laws, laws of nature. Laws such as the law of karma, which teaches us that as a certain seed gets planted, so will that fruit be. Sharon Salzberg

Dangerous consequences will follow when politicians and rulers forget moral principles. Whether we believe in God or karma, ethics is the foundation of every religion.
Dalai Lama XIV

To go from mortal to Buddha, you have to put an end to karma, nurture your awareness, and accept what life brings.
Bodhidharma 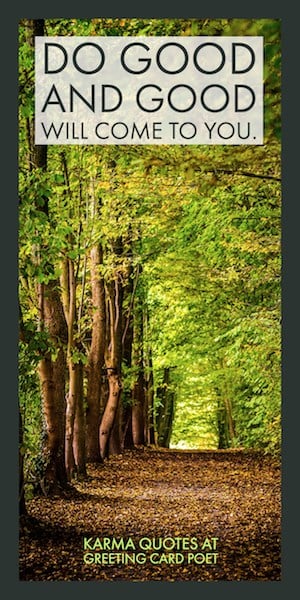