You are here: Home / Giving Up Quotes

A read through these giving up quotes might just be the anecdote that you need if you’re flirting with the thought of abandoning ship.

Accomplishing an objective is a fiercely exhilarating thing. By giving up, you may be tossing away something incredible. According to Thomas Edison, a person’s greatest weakness lies in giving up. People with big dreams don’t give up. There comes a time when challenges appear overwhelming, but they never surrender and trust their hard work because they know at the end of the day, the ecstasy will make all of the misery so worthwhile.

There’s going to be stress about uncertainty and fear about falling flat, but successful men and women keep going. After all, they’ll never know how near they’re to winning.

1.) There is no failure except in no longer trying.
Elbert Hubbard

2.) Our greatest weakness lies in giving up. The most certain way to succeed is always to try just one more time.
Thomas Edison

3.) Survival can be summed up in three words―never give up. That’s the heart of it, really. Just keep trying.
Bear Grylls

4.) If you fall behind, run faster. Never give up, never surrender, and rise up against the odds.
Jesse Jackson

5.) Never give up, for that is just the place and time that the tide will turn.
Harriet Beecher Stowe

Good Never Give Up Quotes

6.) I want to give up my bearings, slip out of who I am, shed everything, the way a snake discards old skin.
Khaled Hosseini

7.) Don’t let the fear of the time it will take to accomplish something stand in the way of your doing it. The time will pass anyway; we might just as well put that passing time to the best possible use.
Earl Nightingale

9.) Don’t be discouraged. It’s often the last key in the bunch that opens the lock.
Unknown

10.) Character consists of what you do on the third and fourth tries.
James A. Michener

11.) Once you embrace your value, talents, and strengths, it neutralizes when others think less of you.
Rob Liano

12.) When someone you love says goodbye, you can stare long and hard at the door; they closed, and forget to see all the doors God has open in front of you.
Shannon Alder 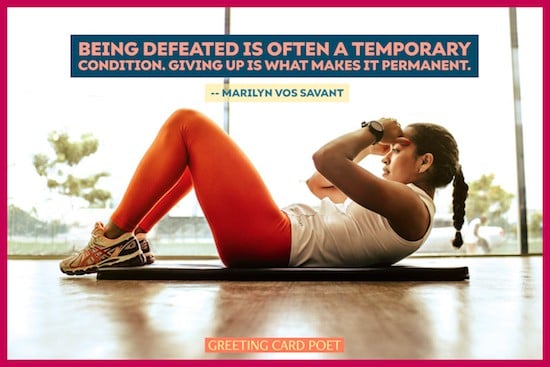 Don’t Give Up Quotes

13.) The broken heart. You think you will die, but you just keep living, day after day after a terrible day.
Charles Dickens

14.) Three months ago, if you asked me, I would have told you that if you really loved someone, you’d let them go. But now I look at you, and I dreamed about someone I loved, and I see that I’ve been wrong. If you really love someone, I think you have to take them back.
Jodi Picoult

15.) No one misses until you walk away, no one appreciates until you’re gone.
R.H. Sin

16.) If you never learned to hold onto someone, how could it possibly hurt now to let them go?
Shannon L. Alder

17.) Sometimes it takes a heartbreak to shake us awake & help us see we are worth so much more than we’re settling for.
Mandy Hale

19.) Have you ever been in love? Horrible isn’t it? It makes you so vulnerable. It opens your chest, and it opens up your heart, and it means that someone can get inside you and mess you up.
Neil Gaiman

Giving Up Your Dreams Quotes

20.) Each mistake teaches you something new about yourself. There is no failure, remember, except in no longer trying. It is the courage to continue that counts.
Chris Bradford

21.) Being defeated is often a temporary condition. Giving up is what makes it permanent.
Marilyn Vos Savant

22.) If you fall behind, run faster. Never give up, never surrender, and rise up against the odds.
Jesse Jackson

23.) Chase your dreams! Never doubt your capabilities to come out as a winner. Struggle hard, but never give up the chase to achieve your dreams!
Avijeet Das

24.) You do what you can for as long as you can, and when you finally can’t, you do the next best thing. You back up, but you don’t give up.
Chuck Yeager

25.) When you know who matters most to you, giving things up, even yourself, doesn’t really feel like a sacrifice.
Kiera Cass

26.) When you feel like giving up, remember why you held on for so long in the first place.
Unknown

27.) A real scientist solves problems, not wails that they are unsolvable.
Anne McCaffrey

29.) The difference between success and failure is not giving up.
Unknown

30.) Don’t give up before the miracle happens.
Fannie Flagg

Never Give Up – Keep Going Quotes

31.) Never give up on something that you can’t go a day without thinking about.
Winston Churchill

32.) Never give up on what you really want to do. The person with big dreams is more powerful than the one with all the facts.
H. Jackson Brown, Jr.

33.) It’s probably my job to tell you life isn’t fair, but I figure you already know that. So instead, I’ll tell you that hope is precious, and you’re right not to give up.
C.J. Redwine

34.) It does not matter how slowly you go as long as you do not stop.
Confucius

35.) Most of the important things in the world have been accomplished by people who had kept on trying when there seemed to be no hope at all.
Dale Carnegie

36.) Our greatest glory is not in never falling, but in rising up every time we fall.
Ralph Waldo Emerson

37.) It seems to me we can never give up longing and wishing while we are thoroughly alive. There are certain things we feel to be beautiful and good, and we must hunger after them.
George Eliot

38.) Sacrifice everything and give up nothing.
Jonathan Lockwood Huie 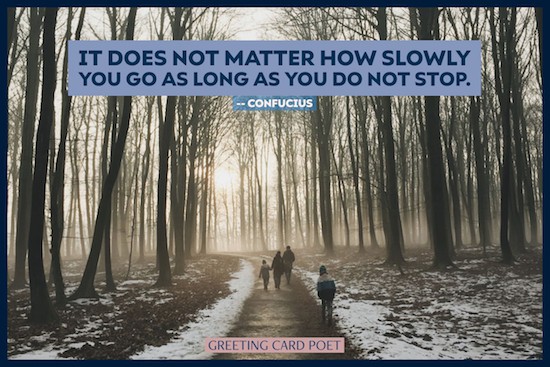 How To Use These Giving Up Quotes

Every man feels destroyed, lost, and helpless at a lot of points in life; some decide to fight through it while others simply decide that giving up is the better as well as, the easier choice.

No matter if you are planning to give up chasing your love or going after your dreams, you can use these at every step of your life; these will retain your hope in yourself, help you get through a breakup and show you and motivate you to do everything in your power to get to your goal and then reach beyond.

These quotes will also teach you hard work, and last but not least, these beautiful quotes by great people that have faced worse odds all through our history and come out as victors will help you hold onto everything you hold dear, but it is difficult to keep close.

Claire is a writer living in Minneapolis.

You’re on the Giving Up Quotes page.