Is Christmas card giving still a holiday tradition? In an age of the Internet, Facebook and smartphones, Christmas cards are viewed by some as being obsolete. A few years ago, e-cards appeared to be the ideal alternative to greeting cards. However, they really haven’t been as big of a force as initially thought. Christmas cards may not have the same popularity as they had 10 years ago, but the tradition is poised to stay a while.

Probably the biggest change in Christmas cards from 30 years is the growth of photography on cards. Being able to include a family photo in a chosen setting seems to be the avenue of choice for many households. With the photo being the star, many cards have moved from the traditional one-fold to more of a post-card type format. With hundreds of choices of format and your own custom photography, cards can look very different. But, for the most part, there’s still a uniformity.

With pre-printed messages featured on cards, folks still find a way to pass on a personal holiday greeting. If your looking for ideas for Christmas card messages, we’ve compiled a great collection. Check ’em out.

Christmas Cards Express the Joy of the Season

With modern technology, many of the cards feature a pre-printed message whereas, in days gone by, cards were nearly always hand-written. For many card recipients, the most taxing part of card opening is discovering the “Christmas Family Brag Letter” attached. The first red flag is that the message contents are so wordy that they won’t fit on the card.

You know the type, “After touring Monte Carlo and Southern France, we were able to sneak on a skiing trip to the Alps…My darling husband Dave was promoted yet again…And, after our son Jack turned down MIT and Stanford, he decided to pursue his doctorate in physics at Harvard. And, Skylar made the varsity tennis team as a 4th grader…”

However, most everyone finds a way to grin and bear it when it comes to these brag letters. We write it off as folks that are incredibly proud of their families vs. people being incredible bores that are oblivious to modesty.

So When Did the Christmas Card Giving Tradition Start?

There is a recorded history of Christmas card giving, and it goes back to the middle of the 19th century. Sir Henry Cole commissioned John Calcott Horsley in 1843 to print him the first Christmas card. Sir Cole was a close friend of Horsley and came up with the idea of sending these greeting cards to loved ones on a special occasion.

The first Christmas Cards were black and white because of the printing technology of the time. They were then colored with by hand and sent out to friends and relatives. It was an alternative way to send greetings to everyone during Christmas time because he didn’t have the time to write letters. When the Penny Post service started in the Victorian times, it became a widely accepted tradition to send out cards. 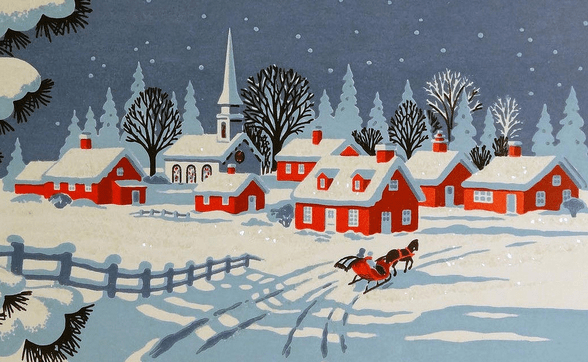 After Sir Cole’s Christmas cards became popular, holiday greeting cards become widely popular in England through the late 19th century and for the entirety of the 20th century. People started to create more elaborate cards in terms of shape and decoration. Along their journey of evolution, greeting cards were further illustrated by famous artists including Walter Crane and Kate Greenaway.

At the same time development in printing technology and processes in the middle of the 20th century helped in the mass production of greeting cards. This not only helped improve their popularity due to the easier availability of a larger number of designs, cost-effectiveness further increased their acceptance. Yet it was not until the 1970s that a large number of small card makers started emerging.

Thanks to the latest in technology, people have access to a wider choice of Christmas cards, not only in terms of looks and designs but also in terms of message.

Check out our Christmas Humor, Jokes and Puns.

Challenges to the Legacy of Christmas Cards

The new generation, brought up using the web on their smartphones, doesn’t have the same exposure to Christmas card giving as its earlier generation. At one time cards were placed all around the house during Christmas. But it is not the tradition any longer. In fact, the current teen generation doesn’t even know how to properly address envelopes. Still, even e-cards have not been able to replace the tradition of greeting cards.

E-cards have however been considered as a crucial factor in the corporate sector for reducing the sales of traditional Christmas cards. Another factor that contributed to the gradual decline of the custom was the drive for reducing the use of paper.
In recent years this gradual decline in the use of Christmas cards seems to have done something good to this tradition. They have become special additions to every Christmas. They stand out as something unique for the new generation, while the older generation cherishes their unique feel and tradition.

The personal touch that a Xmas card can provide hasn’t lost its impact. The tradition lives on. With each card sent, a new Christmas card devotee might be born.

Tim is a writer and creative director who lives in Minneapolis.

You’re on the Christmas Cards: A Tradition That Keeps Giving page.