Bird quotes pay tribute to the sounds, habits, and admirable qualities of our feathered friends.

There are approximately 10,000 species of birds, and as such, there’s a lot to say about them. We’ve gathered the best quotes, sayings, captions, and idioms into this collection for your enjoyment. Have a look and let us know what you think.

Everyone likes birds. What wild creature is more accessible to our eyes and ears, as close to us and everyone in the world, as universal as a bird?
David Attenborough

I realized that If I had to choose, I would rather have birds than airplanes.
Charles Lindbergh

Birds are not free since Men have invented cages.
Mehmet Murat Ildan

Birds are indicators of the environment. If they are in trouble, we know we’ll soon be in trouble.
Roger Tory Peterson

To stand at the edge of the sea, to sense the ebb and the flow of the tides, to feel the breath of a mist moving over a great salt marsh, to watch the flight of shorebirds that have swept up and down the surf lines of the continents for untold thousands of years, to see the running of the old eels and the young shad to the sea, is to have knowledge of things that are as nearly eternal as any earthly life can be.
Rachel Carson 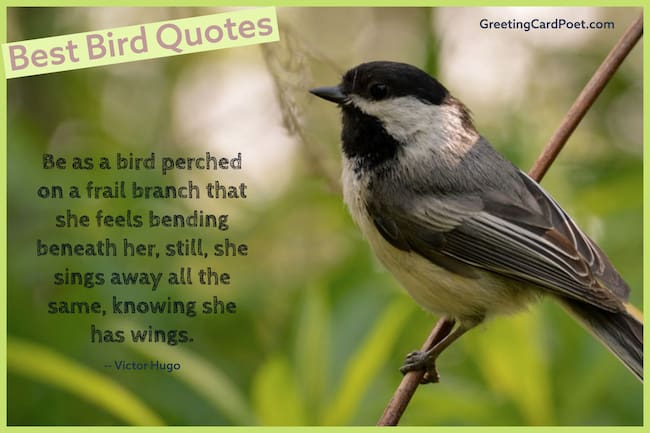 Hold fast to dreams, for if dreams die, life is a broken-winged bird that cannot fly.
Langston Hughes

The presence of a single bird can change everything for one who appreciates them.
Julie Zickefoose

There is nothing in which the birds differ more from man than the way in which they can build and yet leave a landscape as it was before.
Robert Lynd

Like the hummingbird sipping nectar from every flower, I fly joyfully through my days, seeing beauty in everything.
Amethyst Wyldfyre

Use what talents you possess: the woods would be very silent if no birds sang there except those that sang best.
Henry Van Dykeen

I value my garden more for being full of blackbirds than of cherries and very frankly give them fruit for their songs.
Joseph Addison

Faith is the bird that feels the light and sings when the dawn is still dark.
Rabindranath Tagore

My heart is like a singing bird.
Christina Rossetti

Poor indeed is the garden in which birds find no homes.
Abram L. Urban

A bird is three things: Feathers, flight and song, And feathers are the least of these.
Marjorie Allen Seiffert

The sound of birds stops the noise in my mind.
Carly Simon

Some birds are poets and sing all summer.
Henry David Thoreau

Hear how the birds, on every blooming spray, With joyous music wake the dawning day.
Alexander Pope

Be as a bird perched on a frail branch that she feels bending beneath her, still, she sings away all the same, knowing she has wings.
Victor Hugo

In order to see birds, it is necessary to become part of the silence.
Robert Lynd

Why do birds sing in the morning? It’s the triumphant shout: “We got through another night!”
Enid Bagnold

It was wonderful cycling through the woods this evening. I was deafened with bird song.
Noël Coward

Birds sing after a storm; why shouldn’t people feel as free to delight in whatever remains to them?
Rose F. Kennedy

When the owl sings, the night is silent.
Charles de Leusse

An owl is the wisest of all birds because the more it sees the less it talks.
Christie Watson

Owls are known as lonely birds, but it is not known that they have the forest as their best friend!
Mehmet Murat Ildan

The little owls call to each other with tremulous, quavering voices throughout the livelong night, as they sit in the creaking trees.
Theodore Roosevelt 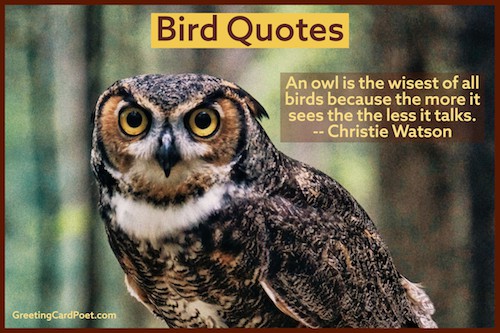 The eagle has no fear of adversity. We need to be like the eagle and have a fearless spirit of a conqueror!
Joyce Meyer

And from Humming-Bird to Eagle, the daily existence of every bird is a remote and bewitching mystery.
Thomas Wentworth Higginson

The Eagle has landed.
Neil Armstrong

May you soar on eagle wings, high above the madness of the world.
Jonathan Lockwood Huie

Eagles come in all shapes and sizes, but you will recognize them chiefly by their attitudes.
E. F. Schumacher

You cannot fly like an eagle with the wings of a wren.
William Henry Hudson 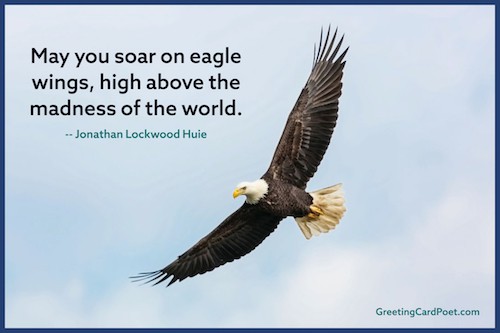 I wish the bald eagle had not been chosen as the representative of our country. The turkey is a much more respectable bird, and withal a true original native of America.
Benjamin Franklin

Turkeys know their names, come when you call and are totally affectionate. They’re better than teenagers.
Elayne Boosler

Coexistence: what the farmer does with the turkey – until Thanksgiving.
Mike Connolly

I hate turkeys. If you stand in the meat section at the grocery store long enough, you start to get mad at turkeys. There’s turkey ham, turkey bologna, turkey pastrami. Someone needs to tell the turkey, ‘man, just be yourself.
Mitch Hedberg 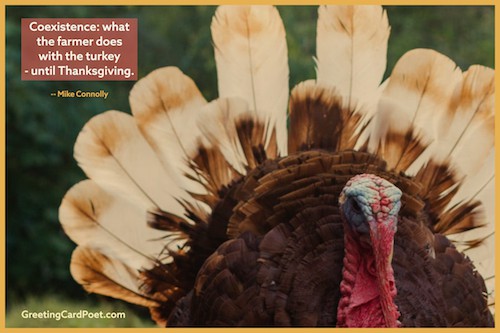 And the crow once called the raven black.
George R.R. Martin

If the crow had been satisfied to eat his prey in silence, he would have had more meat and less quarreling and envy.
Horace

As the crow flies a popular and picturesque expression to denote a straight line.
William Henry Maule

If you have to eat crow, eat it while it’s young and tender.
Thomas Jefferson 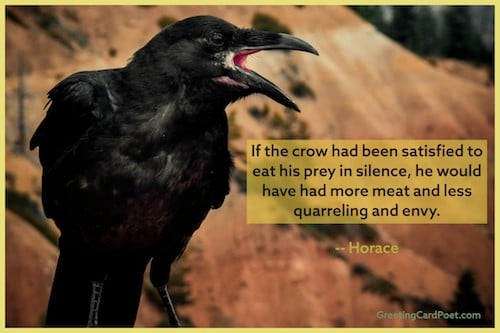 Charm is the enchanted dart, light and subtle as a hummingbird. But it is deceptive in one thing: like a sense of humor, if you think you’ve got it, you probably haven’t.
Laurel Lea

Quick as a hummingbird… she darts so eagerly, swiftly, sweetly dipping into the flowers of my heart.
James Oppenheimer 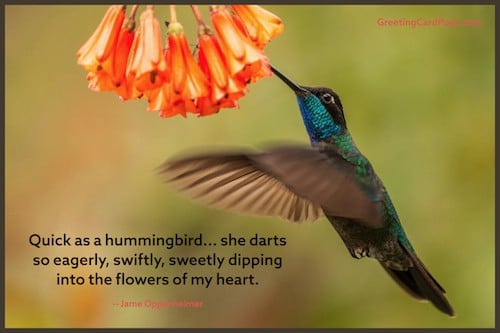 When a cardinal appears in your yard, it’s a visitor from heaven.
Unknown

Cardinals appear when angels are near.
Unknown

2.) An albatross around the neck.

10.) Take someone under your wing.

B.) A talkative bird will not build a nest.

C.) A bird in the hand is worth two in the bush.

F.) The eagle does not catch flies.

G.) The arrow strikes one bird down, but the flock remains.

I.) The summer does not start with a single swallow.

J.) No matter how high a bird flies, it has to come down for water.

3.) Be yourself unless you can be a bird.

12.) Why do hummingbirds hum? They don’t know the words.

How To Use These Bird Quotes, Sayings, Idioms, Captions

Here are a few ideas for putting these bird quotes to use:

2.) Use a favorite quote below your sign off in emails and letters.

3.) Ask your children about the meaning of some of the bird idioms.

4.) Compare an approach in a business setting to a bird in nature.

5.) Post an inspirational bird quote on your fridge, bulletin board, or office cubicle wall.

Brenna is a naturalist living among the redwoods in California where she sees many a woodpecker, Steller’s jay, and hawk.