You are here: Home / Success Quotes and Sayings

It is not hard to find instances where successful folks have been inspired by a few success quotes and sayings that ultimately changed their course of life.

For some, it was easier to obtain success, rather than maintaining that top position year after year. Every time when you lose hope and feel defeated, some simple words can boost your level of confidence and motivation.

Becoming successful in your job is all about having a positive mindset and being willing to sacrifice to reach your goals. The task, no doubt, is tough and a bit of self-motivation in the form of these success quotes and sayings can really act as a game-changer.

Success is no accident. It is hard work, perseverance, learning, studying, sacrifice and most of all, love of what you are doing or learning to do.
Pele

Put your heart, mind, and soul into even your smallest acts. This is the secret of success.
Swami Sivananda

There are no secrets to success. It is the result of preparation, hard work, and learning from failure.
Colin Powell

Success is not final, failure is not fatal: it is the courage to continue that counts.
Winston Churchill

A strong, positive self-image is the best possible preparation for success.
Joyce Brothers

Some people dream of success, while other people get up every morning and make it happen.
Wayne Huizenga

Success comes to those who dedicate everything to their passion in life. To be successful, it is also very important to be humble and never let fame or money travel to your head.
A.R. Rahman

No one is going to hand me success. I must go out & get it myself. That’s why I’m here. To dominate. To conquer. Both the world and myself.
Unknown

Welcome every morning with a smile. Look on a new day as another special gift from your Creator, another golden opportunity.”
Og Mandino

If you don’t build your dream, someone else will hire you to help them build theirs.
Dhirubhai Ambani

To be successful, you must accept all the challenges that come your way. You can’t just accept the ones you like.
Mike Gafka

Develop success from failures. Discouragement and failure are two of the surest stepping stones to success.
Dale Carnegie

Those who dare to fail miserably can achieve greatly.
John F. Kennedy

If at first, you don’t succeed, try, try again. Then quit. No use being a damn fool about it.
W.C. Fields

On my own, I will just create, and if it works, it works, and if it doesn’t, I’ll create something else. I don’t have any limitations on what I think I could do or be.
Oprah Winfrey

The mere fact of being able to call your job your passion is success in my eyes.
Alicia Vikander

So I am 63 and I am not yet done. So what is your excuse? I never went to a University and I am proud to say so because I don’t think I have done too badly.
Folorunsho Alakija,

You only live once, but if you do it right, once is enough.
Mae West

The first step toward success is taken when you refuse to be a captive of the environment in which you first find yourself.
Mark Caine

You can have unbelievable intelligence, you can have connections, you can have opportunities fall out of the sky. But in the end, hard work is the true, enduring characteristic of successful people.
Marsha Evans 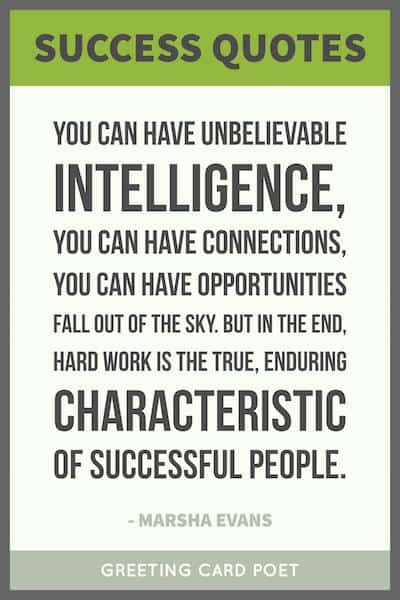 Success is most often achieved by those who don’t know that failure is inevitable.
Coco Chanel

If you are not willing to risk the usual, you will have to settle for the ordinary.
Jim Rohn

Learn from yesterday, live for today, hope for tomorrow. The important thing is not to stop questioning.
Albert Einstein

Take up one idea. Make that one idea your life — think of it, a dream of it, live on that idea. Let the brain, muscles, nerves, every part of your body be full of that idea, and just leave every other idea alone. This is the way to success.
Swami Vivekananda

All our dreams can come true if we have the courage to pursue them.
Walt Disney

It does not matter how slowly you go, so long as you do not stop.
Confucius

Success is walking from failure to failure with no loss of enthusiasm.
Winston Churchill – See the 117 Best Churchill quotes

There is no easy walk to freedom anywhere, and many of us will have to pass through the valley of the shadow of death again and again before we reach the mountaintop of our desires.
Nelson Mandela

It is not the strongest of the species that survive, nor the most intelligent, but the one most responsive to change.
Charles Darwin

Someone is sitting in the shade today because someone planted a tree a long time ago.
Warren Buffett

Whenever you see a successful person, you only see the public glories, never the private sacrifices to reach them.
Vaibhav Shah

Don’t cry because it’s over, smile because it happened.
Dr. Seuss

The first step toward success is taken when you refuse to be a captive of the environment in which you first find yourself.
Mark Caine