You are here: Home / Giving and Fundraising Quotes

These giving and fundraising quotes remind us all of the importance of charitable acts. Giving gives you back more than you imagine. In fact, the greatest of minds think that we are born to give and not just to receive. For many, there is no other sensation that comes close to the gratification that comes from giving. Charity is great for the giver in many ways. It is beneficial for your conscious and makes you feel better. It also makes you feel that you are a contributor to the universe around you. In other words, you feel like being able to make a difference.

Whether you a fundraiser or contributor, inspiration is one of the most important keys for taking that first step in charity. Here are some famous giving and fundraising quotes from some people who have made a difference on this planet in different ways.

Charity sees the need, not the cause.
German Proverb

Wealth is not to feed our egos, but to feed the hungry and to help people help themselves.
Andrew Carnegie

Charity begins at home, but should not end there.
Thomas Fuller

May your charity increase as much as your wealth
Proverb

It is a denial of justice not to stretch out a helping hand to the fallen that is the common right of humanity.
Seneca the Elder

With malice toward none, with charity for all, with firmness in the right as God gives us to see the right, let us finish the work; we are in.
Abraham Lincoln

There can be no Christianity where there is no charity.
Charles Caleb Colton

The charitable give out the door and God puts it back through the window.
Proverb

No one is useless in this world who lightens the burdens of another.
Charles Dickens

Charity never humiliated him who profited from it, nor ever bound him by the chains of gratitude, since it was not to him but to God that the gift was made.
Antoine de Saint-Exupery

The highest use of capital is not to make more money but to make money do more for the betterment of life.
Henry Ford

Charity But how shall we expect charity towards others, when we are uncharitable to ourselves? Charity begins at home, is the voice of the world; yet is every man his greatest enemy, and, as it were, his own executioner.
Sir Thomas Browne

I realized that my money would do vastly more good for others than it could for me and decided to make a commitment to donating to the most effective charities I could find.
Toby Ord 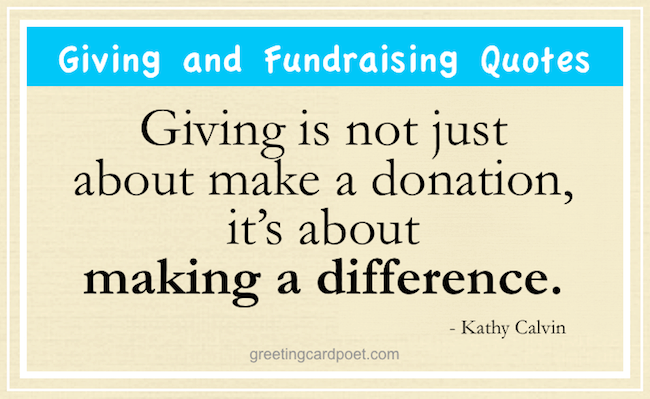 Giving is the master key to success, in all applications of human life.
Bryant McGill

You can give without loving, but you cannot love without giving.
Amy Carmichael

The value of a man resides in what he gives and not in what he is capable of receiving.
Albert Einstein

For it is in giving that we receive.
Francis of Assisi

Have a Heart Quotes

You give to yourself by giving of yourself.
Matt Kahn

The wise man does not lay up his own treasures. The more he gives to others, the more he has for his own.
Lao Tzu

No one has ever become poor by giving.
Anne Frank

Give cheerfully and freely. It is the energy behind the giving that matters so do not give grudgingly. The law of cause and effect guarantees that you shall receive plenty for what you give.
David Cameron Gikandi

When we give cheerfully and accept gratefully, everyone is blessed.
Maya Angelou

You get the best out of others when you give the best of yourself.
Harvey Firestone

Giving is better than receiving Quotations

I don’t think you ever stop giving – I really don’t. I think it’s an on-going process. And it’s not just about being able to write a check. It’s being able to touch somebody’s life.
Oprah Winfrey

Think of giving not as a duty but as a privilege.
John D. Rockefeller Jr.

Most giving is 80% emotion and 20 % rational. And the best way to get to someone’s emotions is to tell a story.
Unknown

In good times and bad, we know that people give because you meet needs, not because you have needs.
Kay Sprinkel Grace

Donors don’t give to institutions. They invest in ideas and people in whom they believe.
G.T. Smith

If there be any truer measure of a man than by what he does, it must be by what he gives.
Robert South

Fundraising – Nothing you do to help another is ever wasted

Fundraising is the gentle art of teaching the joy of giving.
Hank Rosso

The smallest act of kindness is worth more than the grandest intention.
Oscar Wilde

Fundraisers are the catalysts of change.
Unknown

The secret to fundraising comes down to three magic words: before, more, and strategic.
Jay Samit

The most important thing is not to let fundraising get you down. Startups live or die on morale. If you let the difficulty of raising money to destroy your morale, it will become a self-fulfilling prophecy.
Paul Graham

When it comes to fundraising for a social enterprise, if you are pursuing your true passion, you’ll learn to become great at your craft because you’ll care so much about perfecting the skills necessary to make that dream a reality.
Adam Braun

Stewardship at its best engages donors with the impact and outcomes of their investments of time, wisdom, expertise, connections, and money.
Karen Osborne

Fundraisers should use pride, not apology when asking for a gift for a charity that is doing good work.
Henry Rosso

Neither liberal nor conservative politicians can resist the temptation to stand as mighty sequoias of rectitude amid the lowly underbrush of fundraising.
P. J. O’Rourke

Fundraising is not an event; it is a process.
Edgar D. Powell

Service to others is the rent you pay for your room here on earth.
Muhammad Ali

The purpose of life is not to be happy. It is to be useful, to be honorable, to be compassionate, to have it make some difference that you have lived and lived well.
Ralph Waldo Emerson

We should never forget that no Fundraising effort ever succeeds unless one person asks another person for money.
Andrew D. Parker Jr.

The only thing that matters a damn is the donor experience.
Mark Phillips

Fundraising is not a right — it is a privilege and we must always honor it as such.
Henry A. Rosso

Doing nothing for others is the undoing of ourselves.
Horace Mann

You have not lived today until you have done something for someone who can never repay you.
John Bunyan

Volunteers do not necessarily have the time; they just have the heart.
Elizabeth Andrew

When we recognize that a better word for Fundraising is friend-raising, we open limitless doors to creativity in support of our causes.
Sue Vineyard

There are two ‘i’s’ in Fundraising – they should stand for inspiration and innovation, not imitation and irritation.
Ken Burnett

Help others without any reason and give without the expectation of receiving anything in return.
Roy T. Bennett

These sayings can be great motivators for volunteers, donors, and staff in a fundraising campaign. Include them in kick-off materials, emails, texts, letters, and cards as a way of motivating and inspiring your fundraising team.

The measure of a life, after all, is not its duration, but its donation.
Corrie Ten Boom

My happiness comes from the donation of my life in many ways for the current and for future generations.
Debasish Mridha

What a privilege to be here on the planet to contribute your unique donation to humankind. Each face in the rainbow of colors that populate our world is precious and special.
Morris Dees

Good people are like candles – they burn themselves up to give light to others.
Unknown

The best way to find yourself is to lose yourself in the service of others.
Mahatma Gandhi

If you want your checkbook to follow your heart, make a donation to those doing work you support.
Donna Brazile

Life isn’t just about the duration you spend, but by the donation of impact you can pass out before you eventually pass-out.
Seyi Ayoola

It does not matter how much we donate; it matters whether the donation is meaningful. How to define meaningful? Let society and history judge.
Ronnie Chan

Kindness is a language that the deaf can hear and the blind can see.
Mark Twain – More Mark Twain quotes

I wanted to be sure that my donation did two things: went directly into the hands of hurricane victims and that it was an amount that could really impact their lives and make a difference.
Dr. Dre