You are here: Home / Quotes for Father’s Day

These quotes for Father’s Day will have you thinking about dear old dad.

The world wouldn’t be the same place without fathers. It is the sacrifices and hard work by fathers that have made the world a safer place to live. Father’s Day is dedicated to that man in your life who is constantly striving to make this world a better place for his family.

Whether it is your own father or a loved one or a friend who has been a great father, this is the time to let them know how much they matter – to their family, to the people around them, and to this whole world. Below are some lovely Father’s Day quotes and sayings for your father and other dads.

A father is neither an anchor to hold us back nor a sail to take us there, but a guiding light whose love shows us the way.
Unknown

A father is a man who expects his children to be as good as he meant to be.
Carol Coats

To her, the name of father was another name for love.
Fanny Fern 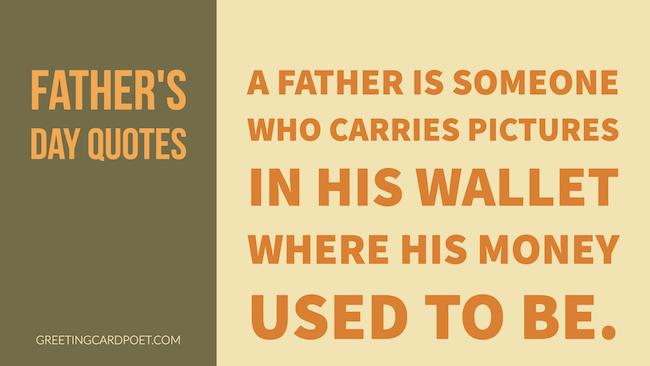 The thing to remember about fathers is… they’re men. A girl has to keep it in mind: They are dragon-seekers, bent on improbable rescues. Scratch any father, you find someone chock-full of qualms and romantic terrors, believing change is a threat, like your first shoes with heels on, like your first bicycle…
Phyllis McGinley

The place of the father in the modern suburban family is a very small one, particularly if he plays golf.
Bertrand Russell

The greatest thing a father can do for his children is to love their mother.
Anjaneth Garcia Untalan

I’ve had a hard life, but my hardships are nothing against the hardships that my father went through in order to get me to where I started.
Bartrand Hubbard

My father didn’t tell me how to live. He lived and let me watch him do it.
Clarence Budington Kelland

It is not flesh and blood but the heart which makes us fathers and sons.
Johann Schiller

Dads are most ordinary men turned by love into heroes, adventurers, story-tellers, and singers of song.
Pam Brown 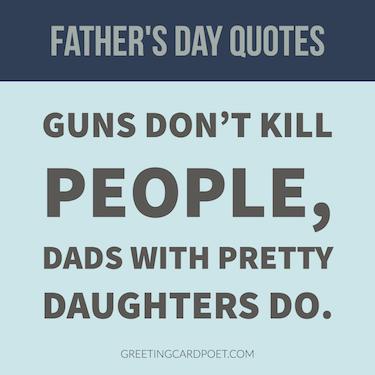 No matter a mother or father or either or neither; in the end, we all grow up. Yet because of you, my stepfather, I grew up to become a man.
Gerardo Campbell

To me, you are a
Priceless commodity.
A wealth of wisdom
You’ve been to me.
Unknown

You may not be my biological father, but you’re the one that I’m proud to call my dad. Thank you for being the best dad in the world.
Unknown

I never got to choose you. You just became my ‘dad.’ So I’m grateful to my mother. For the great taste that she had.
Unknown

You always have
An open mind
A better stepdad
I could never find.
Unknown

Family isn’t always blood. It’s the people in your life who want you in theirs. The ones who accept you for who you are. The ones who would do anything to see you smile, and who love you no matter what.
Unknown

Stepparents are not around to replace a biological parent, rather augment a child’s life experience.
Azriel Johnson 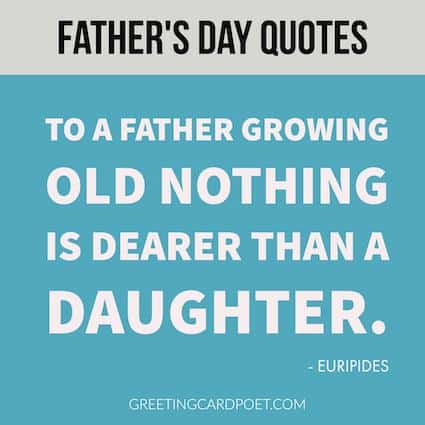 Fathers, be good to your daughters. You are the god and the weight of her world.
Robert Orben

To a father growing old nothing is dearer than a daughter.
Euripides

In honor of Father’s Day, I’m waiting until tomorrow to ask you to babysit.
Unknown

There’s something like a line of gold thread running through a man’s words when he talks to his daughter, and gradually over the years, it gets to be long enough for you to pick up in your hands and weave into a cloth that feels like love itself.
John Gregory Brown

Behind every great daughter is a truly amazing dad.
Unknown

Someday I will find my prince but my Dad will always be my King.
Unknown

A father is always making his baby into a little woman. And when she is a woman he turns her back again.
Enid Bagnold

It doesn’t matter who my father was; it matters who I remember he was.
Anne Sexton

Fathers, be your daughter’s first love and she’ll never settle for anything less.
Unknown

A daughter needs a dad to be the standard against which she will judge all men.
Unknown

They say that from the instant he lays eyes on her, a father adores his daughter. Whoever she grows up to be, she is always to him that little girl in pigtails. She makes him feel like Christmas.
Unknown

A father is someone who carries pictures in his wallet where his money used to be.

Dear Daddy, no matter where I go in life, you’ll always be my number one man.
Unknown

People see Archie Bunker everywhere. Particularly girls; poor girls, rich girls, all kinds of girls are always coming up to me and telling me that Archie is just like their dad.
Carroll O’Connor

Some people don’t believe in heroes but they haven’t met my dad!
Unknown

It no longer bothers me that I may be constantly searching for father figures; by this time, I have found several and dearly enjoyed knowing them all.
Alice Walker

There will always be a few people who have the courage to love what is untamed inside of us. One of those men is my father.
Unknown

It was my father who taught me to value myself. He told me that I was uncommonly beautiful and that I was the most precious thing in his life.
Dawn French

Blessed indeed is the man who hears many gentle voices call him father!
Unknown

In addition to being a curator of quotes, Mike is an author, inventor, and entrepreneur. He and his wife have four daughters. He has received an estimated 100 Father’s Day cards through the years.

You’re on the Quotes for Father’s Day page. 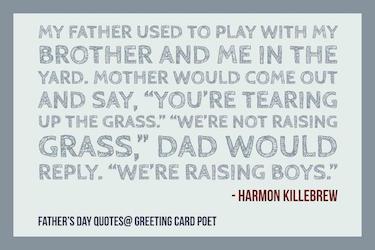 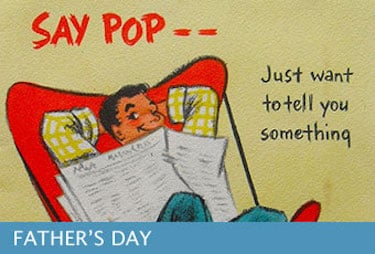 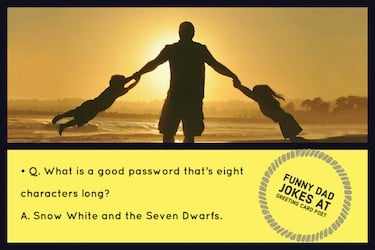 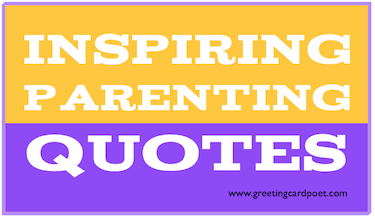