You are here: Home / Good Bravery Quotes for the Strong

These good bravery quotes for the strong are some of the most inspiring words you can share with your friends and loved ones. Brave men and women have achieved more in this world than anyone else ever could. Whether you are facing a challenge, an issue or a difficult situation, being brave can help solve all your problems.

Share these bravery quotes with others who are in need of more courage. These quotes can also make you feel better and stronger in challenging times.

Be brave if you lose and meek if you win.
Harvey Penick

In order to achieve anything, you must be brave enough to fail.
Kirk Douglas 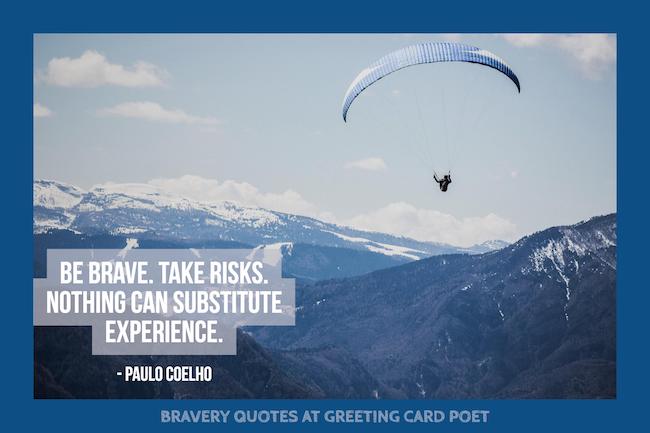 Be brave enough to start a conversation that matters.
Dau Voire

Be bold, speak from your heart.
Nikki Rowe

Be brave. Even if you’re not, pretend to be. No one can tell the difference.
Jackson Brown Jr.

Be brave and create the life of your dreams. Dare to strive for the spectacular.
Amy Leigh Mercree

Be brave. Take risks. Nothing can substitute experience.
Paulo Coelho

You got to be brave. If you feel something, you’ve really got to risk it.
Mel Brooks

Be bold, be brave enough to be your true self.
Queen Latifah

In the flush of love’s light, we dare be brave. And suddenly we see that love costs all we are, and will ever be. Yet it is only love which sets us free.
Maya Angelou

Be brave enough to live life creatively. The creative place where no one else has ever been.
Alan Alda

We could never learn to be brave and patient if there were only joy in the world.
Helen Keller 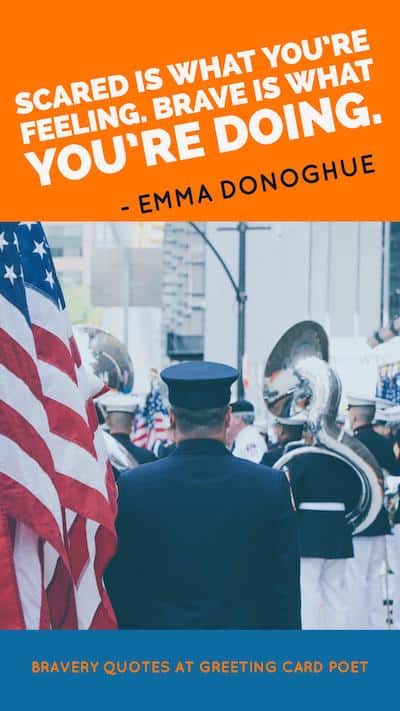 You can, you should, and if you’re brave enough to start, you will.
Stephen King

It’s better to be a lion for a day than a sheep all your life.
Elizabeth Kenny

I learned that courage was not the absence of fear, but the triumph over it. The brave man is not he who does not feel afraid, but he who conquers that fear.
Nelson Mandela

Experimentation is the precursor to wisdom. Be bold. Be brave. Make mistakes. Truth follows the courageous.
Unknown

If you’re brave enough to say goodbye, Life will reward you with a new hello.
Paulo Coelho

I have a theory that selflessness and bravery aren’t all that different.
Veronica Roth

If it scares you, it might be a good thing to try.
Seth Godin

Being brave means knowing that when you fail, you don’t fail forever.
Lana Del Rey

You are braver than you believe, stronger than you seem and smarter than you think.
Winnie the Pooh

Be the Bold One Sayings

Fear can keep a man out of danger but courage only can support him in it.
Thomas Fuller

Dare to courageous in life.
You have nothing to lose.
Lailah Gifty Akita

Pride is holding your head up when everyone around you has their bowed. Courage is what makes you do it.
Bryce Courtenay

Dare to be brave today, and trust that when you extend your wings, you will fly.
Mary DeMuth

Sometimes, making the wrong choice is better than making no choice. You have the courage to go forward; that is rare. A person who stands at the fork, unable to pick, will never get anywhere.
Terry Goodkind

One of the most powerful lessons in life is to recognize that no one can give you power, and many people don’t want you to have it. You have to find the courage to seize it, own it and hold on!
Shannon L. Alder

There is a certain enthusiasm in liberty that makes human nature rise above itself, in acts of bravery and heroism.
Alexander Hamilton

Don’t be afraid of your fears. They’re not there to scare you. They’re there to let you know that something is worth it.
C. JoyBell C.

Bravery has no place where it can avail nothing.
Samuel Johnson

Bravery is believing in yourself, and that thing nobody can teach you.
El Cordobes

Bravery is not a quality of the body. It is of the soul.
Mahatma Gandhi

Before I knew you, I thought brave was not being afraid. You’ve taught me that bravery is being terrified and doing it anyway.
Laurell K. Hamilton