This is one awesome collection of Christmas jokes! ‘Tis the season of joy, and there’s no more joyful sound than that of laughter. These are sure to get everyone into the holiday spirit and call be enjoyed all the way through the Holidays. In our collection, you’ll find lots of family-friendly humor about Christmas, Santa, elves, reindeer, and so much more to keep your family and friends ho-ho-ho-ing throughout the holidays.

What else more do we have in store? Corny Xmas jokes? Oh yea, we have those too! Have fun bring in the good cheer of the season with this collection.

What do reindeer hang on their Christmas trees?
Horn-aments.

Why is a broken drum the best Xmas gift ever?
You just can’t beat it.

Why are Christmas trees so bad at sewing?
They always drop their needles.

Which of Santa’s reindeers have to mind their manners most?
Rude-olph.

Why don’t reindeer like picnics?
Because of all their ant-lures.

What’s worse than Rudolph with a runny nose?
Frosty the snowman with a hot flush.

Why did the turkey cross the road?
Because he wasn’t chicken. 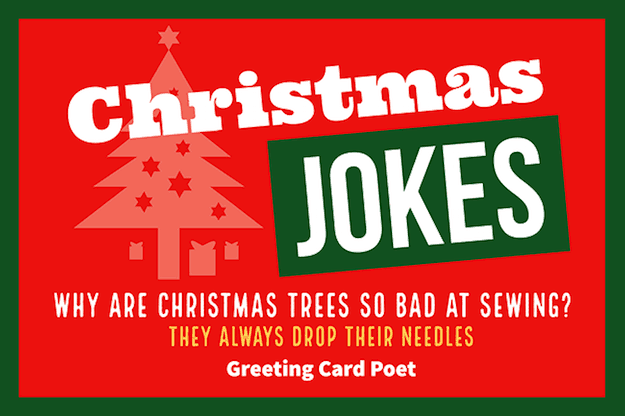 What happened to the turkey at Christmas?
It got gobbled.

How do snowmen get around?
They ride an icicle.

When is a boat just like snow?
When its adrift.

What song do you sing at a snowman’s birthday party?
Freeze a jolly good fellow.

What did one snowman say to the other?
I couldn’t hear them, so I have snow-idea.

Why is winter a snowman’s favorite time of year?
It is when a snowman can camouflage.

Children: This turkey tastes like an old sofa.
Mom: Well, you asked for something with plenty of stuffing.

What is a skunk’s favorite Christmas song?
Jingle smells.

Why does Scrooge love reindeer?
Because every single buck is deer to him.

Where do the elves keep their earnings?
In a snow bank.

Why does Santa enter houses through the chimneys?
Because it soots him.

What do you call a frog hanging from the ceiling?
Mistletoad.

What do you get when you cross a snowman with a vampire?
Frostbite.

What do you get when you cross Santa with a duck?
A Christmas Quacker.

Tip: These jokes and puns are great for your family Christmas card.

How do you know that a snowman is not in a good mood?
When he gives you the cold shoulder.

Who hides in the bakery at Christmas?
A mince spy.

What did Adam say on the day before Christmas?
It’s Christmas, Eve.

How does Xmas Day end?
With the letter ‘Y’.

What carol is heard in the desert?
O camel ye faithful.

What do angry mice send to each other during the holiday season?
Cross Mouse Cards.

What are the best Christmas sweaters made from?
Fleece Navidad.

How did Scrooge win the football game?
The Ghost of Christmas passed.

What did the beaver say to the Christmas Tree?
Nice gnawing you.

Why was the snowman rummaging in the bag of carrots?
He was picking his nose.

What’s the best thing to put into a Christmas Cake?
Your teeth.

Where would you find chili beans?
At the north pole.

What do sheep say at Xmas?
Wool-tide Bleatings or A Merry Christmas to Ewe. 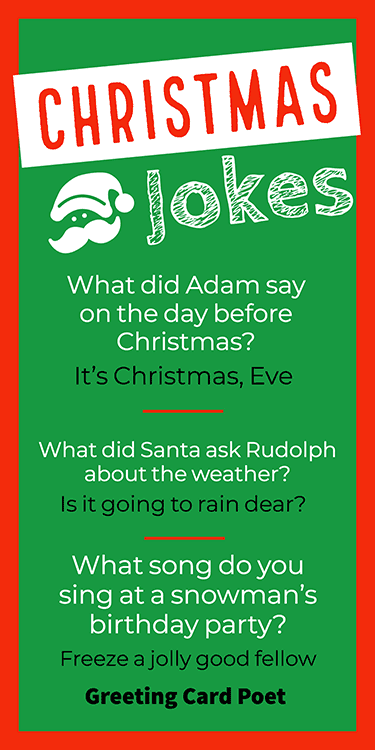 Where does Santa keep all his money?
At the local snow bank.

What do you call Santa when he takes a break?
Santa Pause.

What do you get if Santa goes down the chimney when a fire is lit?
Krisp Kringle.

Who is Santa Claus married to?
Mary Christmas.

What do you get if you cross Father Christmas with a detective?
Santa Claus.

What did Santa ask Rudolph about the weather?
Is it going to rain dear?

What do you call a man who claps at Christmas?
Santapplause.

What did Santa say to the smoker?
Please don’t smoke, it’s bad for my elf.

Where does Santa go when he’s sick?
To the elf center.

What does Rudolph the red-nosed reindeer eat for breakfast?
Deerios.

Where does Rudolph the red-nosed reindeer express his deepest, secret thoughts?
In his reindiary.

Why is Rudolph the red-nosed reindeer so cold at Christmas?
Because it’s in Decembrrrrr.

What did Rudolph say when he stepped into a big puddle?
It must have reindheer.

What does Rudolph the red-nosed reindeer like about rainy days?
The reinbows.

How does Rudolph know when Christmas is coming?\
He looks at the calen-deer.

Why didn’t Rudolph make honor roll in school this marking period?
Because he went down in History.

What do you call a broke Santa?
Saint Nickel-less.

What did the one snowman say to the other?
Do you smell carrot?

What is the difference between a Santa and a knight?
One slays the dragon, and the other drags the sleigh.

What did Adam say the day before Xmas?
It’s Christmas, Eve.

Why are Xmas trees bad at sewing?
They always drop their needles.

How much did Santa Claus pay for his sleigh?
Nothing. It was on the house.

Why did the elves rob the liquor store?
They needed some holiday spirit.

What did the North Pole weatherman say to his wife?
It’s going to reindeer.

What happened to the thief who stole the advent calendar?
He got 25 days.

What do you call an elf who sings?
A wrapper.

Why did the elf push his bed into the fireplace?
He wanted to sleep like a log.

Why wouldn’t Santa ride his sleigh?
For elf and safety concerns.

What cars do elves drive?
A toy yota.

Why does Scrooge love reindeer?
Because every buck is deer to him.

What is green, white, and red all over?
A sunburnt elf.

What did the cow say on Xmas morning?
Mooooey Christmas.

What do you call an elf who steals gift wrap from the rich and gives it to the poor?
Ribbon Hood.

Where do mistletoe go to become famous?
“Holly” wood.

Who is Santa Claus married to?
Mary Christmas.

What does the Grinch do with a baseball bat?
Hits a gnome and runs.

What do you call a frog hanging from the ceiling?
Mistletoad.

Why do Mummies like Christmas so much?
Because of all the wrapping.

What do you call a reindeer who can write with both his left and his right hooves?
Bambi-dextrous.

What do snowmen like to do at the weekend?
Chill out.

What do you call a bankrupt Santa?
Saint Nickel-less.

What was the elf’s favorite sport?
Miniature golf.

What kind of money did the elf on the shelf use?
Jingle bills.

Who lives at the North Pole, builds toys and rides in a pumpkin?
Cinder-ELF-a.

What do you call a rich elf?
Welfy.

What do elves eat for breakfast?
Frosted Flakes.

What did Santa say to the elf who said he made the worst toys?
Don’t be little yourself.

Why was the elf so quick to anger?
He had a short fuse.

What do you call a frozen elf hanging from the ceiling?
An efl-cicle.

Where do elves go to dance?
Christmas Balls.

Who is the Music Elf’s favorite reindeer?
Dancer.

Why did Santa’s helper visit the doctor?
Because he had low elf esteem.

Mike is the editor and founder of Greeting Card Poet.

Xmas Puns and One Liners