You are here: Home / Easy Riddles: Funny, For Kids, With Answers

See if you can solve these easy riddles without looking at the answers. Sure, some of them will have you thinking and some may even stump you, but don’t get discouraged. After a read-through, your brain will be sharper and ready for more challenges.

Which months have 28 days?
All of them, of course.

What has a face and two hands but no arms or legs?
A clock.

What has to be broken before you can use it?
An egg.

What has one head, one foot and four legs?
A bed.

What has a neck but no head?
A bottle. 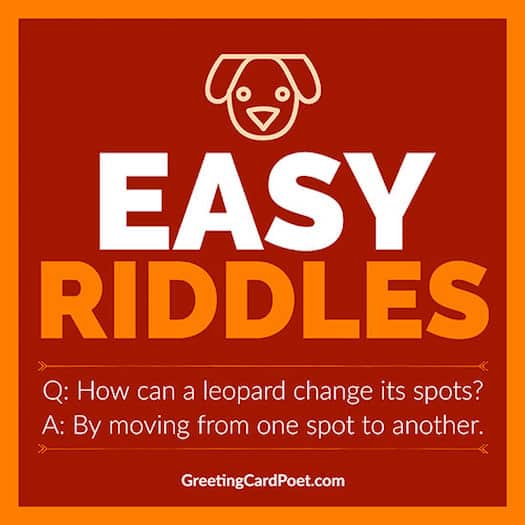 How can a leopard change its spots?
By moving from one spot to another.

What gets wetter and wetter the more it dries?
A towel.

What bird can lift the most?
A crane.

What word is spelled wrong in all the dictionaries?
Wrong.

What is full of holes but still holds water?
A sponge.

What has one eye but can’t see?
A needle.

What is brown and sticky?
A stick.

What comes down but never goes up?
Rain.

What can you catch but not throw?
A cold.

What goes up but never goes down?
Your age.

Why do lions eat raw meat?
Because they never learned to cook.

What’s orange and sounds like a parrot?
A carrot.

What has hands but doesn’t clap?
A clock.

Where do cows go for their holidays?
Moo York.

If two’s company, and three’s a crowd, what are four and five?
Nine.

Does a ton of feathers or a ton of bricks weigh more?
They both weigh a ton.

How much dirt is in a hole 5 feet wide and 4 feet deep?
None.

I am an odd number. Take away a letter and I become even. What number am I?
Seven.

How do you make the number one disappear?
Add the letter G and it’s “gone.”

If you took two apples from three apples how many apples would you have?
Two apples – the two that you took.

How many bricks does it take to complete a building made from bricks?
One – the last one.

I have two coins that add up to 30 cents. One is not a nickel. What are the two coins?
A nickel and a quarter. (One isn’t; but one is.)

A monkey, a squirrel, and a bird are racing to the top of a coconut tree. Who will get the banana first, the monkey, the squirrel, or the bird?
None of them, because you cannot get a banana from a coconut tree!

What gets larger as it eats but smaller as it drinks?
A fire.

What can go up a chimney down, but can’t go down a chimney up?
An umbrella.

What grows up at the same time it grows down?
A goose.

The more you have of it, the less you see. What is it?
Darkness.

What has 3 feet but cannot walk?
A yardstick.

What has 4 fingers and a thumb, but is not living?
A glove.

How many seconds are there in a year?
Twelve – January 2nd, February 2nd, March 2nd…

If everyone bought a white car, what would we have?
A white carnation.

Why do bees hum?
Because they do not know the words.

What’s green, but not a leaf; copies others, but is not a monkey?
A parrot.

What did the red light say to the green light?
“Don’t look! I am changing!”

What jumps higher than a building?
Everything, buildings don’t jump.

What is easy to get into but hard to get out of?
Trouble.

Why is an island like the letter T?
Because it is in the middle of water.

What five-letter word becomes shorter when you add two letters to it?
Short + er = Shorter.

What is the center of gravity?
V.

What do an island and the letter T have in common?
They’re both in the middle of water.

What comes once in a minute and twice in a moment, but never in a thousand years?
The letter M.

What always ends everything?
The letter G.

What type of cheese is made backwards?
Edam.

Which letter of the alphabet has the most water?
The C. 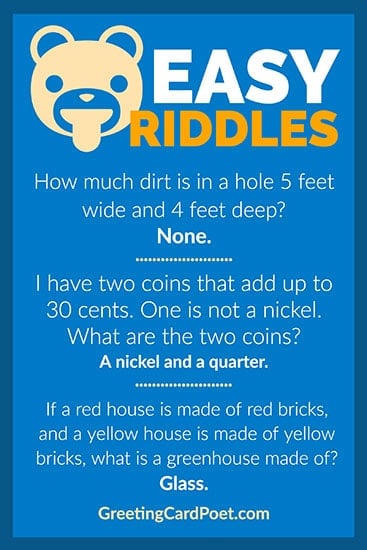 You draw a line. Without touching it, how do you make it a longer line?
Draw a short line next to it and now it’s the longer line.

If a brother, his sister, and their dog weren’t under an umbrella, why didn’t they get wet?
It wasn’t raining.

If you were in a race and passed the person in 2nd place, what place would you be in?
2nd.

How far can a fox run into the woods?
Only halfway, otherwise it would be running out of the woods!

What fastens two people yet touches only one?
A wedding ring.

What needs an answer but doesn’t ask a question?
A telephone.

What four days of the week start with the letter “T”?
Tuesday, Thursday, today and tomorrow.

What loses its head in the morning and gets it back at night?
A pillow.

What two things can you never eat for breakfast?
Lunch and dinner!

During what month do people sleep the least?
February, it’s the shortest month after all.

What is so delicate that even mentioning it breaks it?
Silence.

A boy and a doctor went fishing. The boy was the doctor’s son but the doctor wasn’t the boy’s father. Who is the doctor?
The boy’s mother.

What can be as big as an elephant but weigh nothing?
It’s shadow. 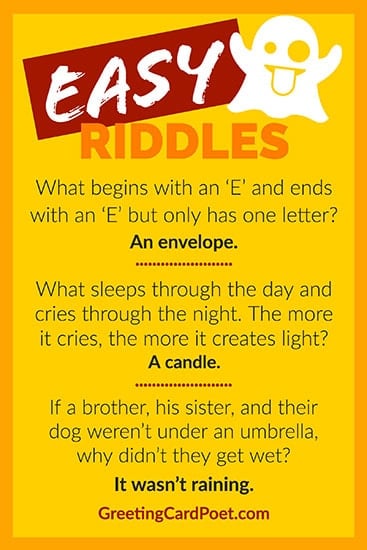 What is the last thing you take off before bed?
Your feet off the floor.

What kind of coat can you only put on when it’s wet?
A coat of paint.

What can make an octopus laugh?
Ten tickles (tentacles).

You bought me for dinner but never eat me. What am I?
Cutlery.

I have keys but no locks. I have a space but no room. You can enter, but can’t go outside. What am I?
A keyboard.

What belongs to you but others use it more than you do?
Your name.

Where does success come before work?
The dictionary.

I saw a boat full of people, yet there wasn’t a single person on the boat. How?
They were all married.

What gets bigger the more you take away?
A hole.

What runs but never walks, has a mouth but never talks?
A river.

How can a pants pocket be empty and still have something in it?
It can have a hole in it.

Mary’s mother had four children: April, May and June were the first three. What is the name of the 4th child?
Mary.

It is greater than God, more evil than the devil, the poor have it, the rich need it, and if you eat it, you will die. What is it?
Nothing.

What goes all the way around the world but stays in the corner?
A stamp.

You’re on our Easy Riddles page.

Check out these other riddling pages:

Math Riddles
Tricky
What Am I Riddles