What does Auld Lang Syne mean and why do we sing it on New Year’s Eve?

Let’s take a deeper look at the origins of the famous song and how it has become a central part of New Year celebrations around the world for almost a century.

Why do we sing Auld Lang Syne?

Auld Lang Syne is a well-known song in English-speaking countries and around the world. It is used traditionally to bid farewell to the old year and welcome the new year at the stroke of midnight, or throughout the night, each New Year’s Eve.

The song is also sometimes used on significant ceremonial occasions like graduations and funerals. The Scouts even use the song in the closing ceremonies at jamborees and other functions.

Singing the song to mark the end of the old year and the beginning of the new year is a worldwide tradition. In New York City’s Times Square, the ball drop is a prominent part of the celebration at midnight. When the ball has dropped, and the song is played and fireworks erupt to signal the start of the new year. 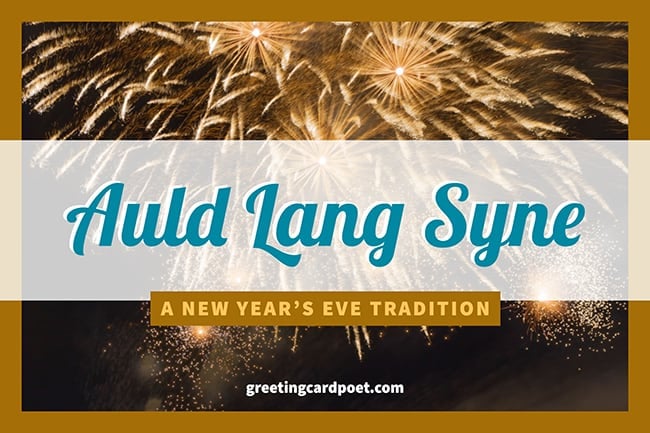 Just what does Auld Lang Syne mean? The phrase translates to “old long since,” and essentially means, “days gone by.” The phrase is written in the Scots language and another translation is “for the sake of old times.” The phrase became popular based on Robert Burns’s poem titled, “Auld Lang Syne.” The lyrics are commonly sung to an old folk tune. Burns cited as his muse the Scottish oral tradition.

“The following song, an old song, of the olden times, and which has never been in print, nor even in manuscript until I took it down from an old man,” wrote Burns to the Scots Musical Museum.

Apparently, the main message of the song is to share a drink in honor of things that have passed and to remember old friends. I think most folks would agree that this message as aged well.

How did Auld Lang Syne become a New Year song?

Guy Lombardo and his orchestra began the tradition of playing the song for New Year’s Eve celebrations in New York City beginning in 1929.

He explained to LIFE magazine in 1965 how he made the song a New Year’s Eve staple, “…Auld Lang Syne is our theme song—and was long before anyone ever heard us on the radio. In our particular part of western Ontario, where there’s a large Scottish population, it was traditional for bands to end every dance with Auld Lang Syne. We didn’t think it was known here. When we left Canada we had no idea we’d ever play it again.” 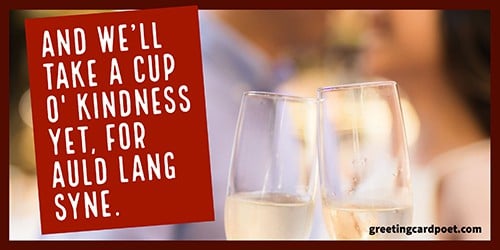 Here is a printable English translation of the song (you can copy and paste these lyrics into any text-editing program and print them out for your New Year’s Eve guests). There are five verses, each followed by the chorus. At New Year’s Eve celebrations, people typically only sing the first verse along with the chorus.

Should old acquaintance be forgot,

And never brought to mind?

Should old acquaintance be forgot,

For auld lang syne, my dear,

we’ll take a cup of kindness yet,

and surely I’ll buy mine!

And we’ll take a cup o’ kindness yet,

We two have run about the slopes,

and picked the daisies fine;

But we’ve wandered many a weary foot,

We two have paddled in the stream,

from morning sun till dine†;

But seas between us broad have roared

And there’s a hand my trusty friend!

And give me a hand o’ thine!

He sent the poem to the Scots Musical Museum in 1788 along with this note, “The following song, an old song, of the olden times, and which has never been in print, nor even in manuscript until I took it down from an old man.”

The tune’s popularity in Scotland and Great Britain grew and spread overseas to the U.S. and other countries, especially after Guy Lombardo and his orchestra introduced it to their New Year’s Eve audience in New York City in 1929. His version is played in Times Square each New Year’s Eve as the ball drops for the new year.

Musical scholars debate whether the melody we sing today is the same as when Burns originally wrote it.

Other usages of Auld Lang Syne

17th- and 18th-century poets Robert Ayton, Allen Ramsay, and James Watson used the phrase “auld lang syne” in their works. Even earlier examples can be found in Scots folk songs. Watson had in fact printed a ballad titled “Old Long Syne” in 1711. Robert Burns, widely credited with penning this favorite, most likely incorporated Watson’s earlier version in his poem.

What does Auld Lang Syne mean?

The phrase Auld Lang Syne is a Scots-language saying. Its literal translation is “old long since.”

Its idiomatic meaning is “times gone by”, “days gone by” or “for the sake of old times.”

The lyrics ask the rhetorical question “Should old acquaintance be forgot, and auld lang syne?”, reminding us to always keep old friends in mind and remember the old days.

What is the best version of Auld Lang Syne?

Many artists have covered and recorded their own versions of this song. Check out this list of top recordings and performances of the song.

Best covers of the song:

What is a cup of kindness?

The chorus includes the line “we’ll take a cup of kindness yet, for auld lang syne.” These lyrics refer to the tradition of raising a glass and toasting to goodwill and friendship.

Aside from the playing of the song, what other traditions are on display during New Year’s Eve celebrations?

Be at war with your vices, at peace with your neighbors, and let every new year find you a better man.
Benjamin Franklin

Cheers to a new year and another chance for us to get it right.
Oprah Winfrey

An optimist stays up until midnight to see the new year in. A pessimist stays up to make sure the old year leaves.
William E. Vaughan

Every moment is a fresh beginning.
T.S. Eliot

On New Year’s Eve, the whole world celebrates the fact that a date changes. Let us celebrate the dates on which we change the world.
Akilnathan Logeswaran

Tonight’s December thirty-first,
Something is about to burst.
The clock is crouching, dark and small,
Like a time bomb in the hall.
Hark, it’s midnight, children dear.
Duck! Here comes another year!
Ogden Nash

Tomorrow is the first blank page of a 365-page book. Write a good one.
Brad Paisley

And now we welcome the new year. Full of things that have never been.
Rainer Maria Rilke

New year—a new chapter, new verse, or just the same old story? Ultimately we write it. The choice is ours.
Alex Morritt

It’s never too late to become who you want to be. I hope you live a life that you’re proud of, and if you find that you’re not, I hope you have the strength to start over.
F. Scott Fitzgerald

The New Year is a painting not yet painted; a path not yet stepped on; a wing not yet taken off! Things haven’t happened as yet! Before the clock strikes twelve, remember that you are blessed with the ability to reshape your life!
Mehmet Murat ildan

Don’t live the same year 75 times and call it a life.
Robin Sharma

We must be willing to get rid of the life we’ve planned, so as to have the life that is waiting for us. The old skin has to be shed before the new one can come.
Joseph Campbell

Every time you tear a leaf off a calendar, you present a new place for new ideas and progress.
Charles Kettering

I like the dreams of the future better than the history of the past.
Thomas Jefferson

The magic of new beginnings

The magic in new beginnings is truly the most powerful of them all.
Josiyah Martin

Each age has deemed the new-born year the fittest time for festal cheer.
Walter Scott

Say goodbye to the old and welcome in the new year

Now you know the meaning of that famous New Year’s Eve song Auld Lang Syne. Instead of mumbling the unknown words along with the other revelers, you’ll be able to belt out the words clearly and confidently at the next new year’s celebration.

Be sure to say a toast to old friends, and best of luck in the New Year — for old time’s sake!

Grace’s favorite time of year is the holidays. She hopes everyone has happy holidays and the most amazing year ever. And, if that means getting together with old friends and singing an old Scottish folks song, all the better.